The Witless Protection Program is a Seattle philosophical ethics reading group, comprising a core group that shares laughter, coffee, pastries, and serious, if hilarious, discussion. Since 2000, Witless has met Saturday mornings, 9:00 - noon, at Third Place Commons in Lake Forest Park, Washington (a suburb of Seattle). If you would like to visit for a session, please call Brad Lancaster at 206-367-3122 or email brad@lancasterlawoffice.com. 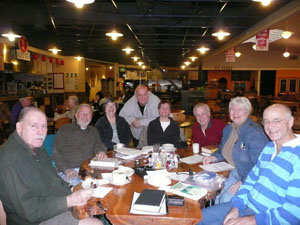 “’The study . . . of the original text can never be sufficiently recommended.’ ‘Tis the shortest, surest, and most agreeable way to all sorts of learning. Draw from the spring-head, and take not things at second hand. Let the writing of the great masters be never laid aside, dwell upon them, settle them in your mind, and cite them upon occasion; make it your business thoroughly to understand them in their full extent and all their circumstances; acquaint yourself fully with the principles of original authors; bring them to a consistency, and then do you yourself make your deductions.”

Witless has read the texts in the following list in the course of its long conversation. Hyperlinked titles take you to Brad's epitomes of some texts. You are welcome to read those epitomes. Please cite to Brad Lancaster and this website if quoting any of Brad's epitomes, which, while tracking the thought of the author epitomized, are themselves independent, copyrighted works authored by Brad Lancaster. All intellectual property rights are reserved.

If you are just beginning to explore your interest in philosophical ethics, you may want to read Brad's epitomes of McIntyre, A Short History of Ethics and Dewey, Theory of the Moral Life, and then read those volumes themselves. If you would prefer a more accessible introduction to ethical thought, you might want to read Brad's Trubble Talk, a tough letter to a troubled teenager enduring some bumps in the road as she entered adulthood.

From April 2011, Witless has turned its focus from the question “What should I do?” to the question “What should we do?” That is, our focus is shifting from philosophical ethics considered from a community member’s perspective (morality) to the perspective of the community as a whole (political philosophy). We have begun with questions surrounding violence and non-violence, and will proceed to questions of political structure and theory.

The titles that follow are texts likely to enter Witless's reading and conversation over the next few years. We do not promise to read all of these texts or only these texts.